Test report: the Canon EOS 6D on a microscope

Immediately after completing the test series for the Canon EOS-1D X professional full frame camera, we took a closer look at what is currently the smallest Canon full frame camera: the EOS 6D. In terms of price, at approx. € 1,800 (body only), it is positioned as an entry-level full frame camera. First and foremost we were interested to see whether or not the EOS 6D is a genuine alternative to the higher-priced full frame cameras for use in microscopy. 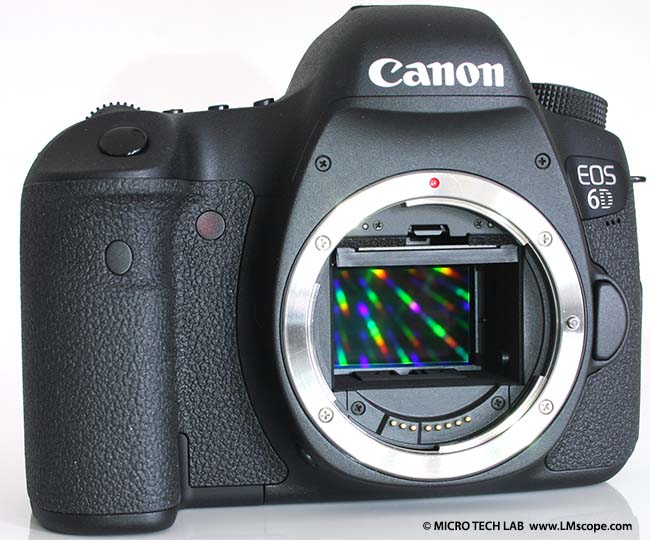 After working with the Canon EOS-1D X shortly beforehand, it was hard to believe that this diminutive camera was not a toy! It weighs just 700 grams (body only), but is finished to a very high standard. Its ergonomics are very good, and it is comfortable to hold (especially for users with smaller hands). The control layout on the rear of the camera is clear and easy to follow. Unfortunately, like all of Canon’s full frame cameras, it does not have a rotating display. However, if the camera is connected to a monitor (HDMI port) or a PC (Canon EOS Utility), then this is not needed. The fixed display itself is excellent. It measures 3” (7.7 cm) from corner to corner and has over one million pixels.

The camera operation in general has become simpler compared to the other Canon full frame cameras (Canon EOS 5D Mark II,Mark III, Canon EOS-1D X). This indicates that the 6D rather focuses on entry-level users.

The full frame sensor (CMOS: 36 x 24 mm) has 20.2 megapixels, which enables it to capture a lot of light and thus reduces the image noise, especially at higher ISO settings. It delivers images with good resolutions and a natural colour reproduction.

As additional features, the camera also offers WLAN and GPS. Both functions can be activated via the menu; however, the additional power consumption has a tangible effect on the battery performance. We will talk about WLAN later, but as far as GPS is concerned, we consider this to be a very practical feature. The coordinates for each image are saved when it is captured. In our case, this is obviously not necessary, as we know where our laboratory is anyway! However, for macrophotographers who “hunt” in the field, it is undoubtedly an extraordinarily useful additional feature. 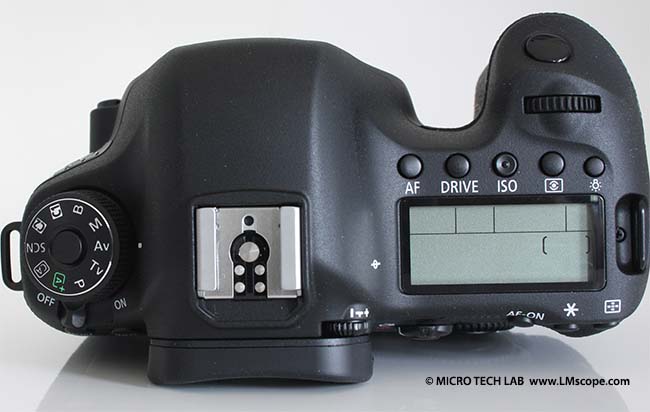 On the top of the camera there is an additional display for settings, and the program selector dial. 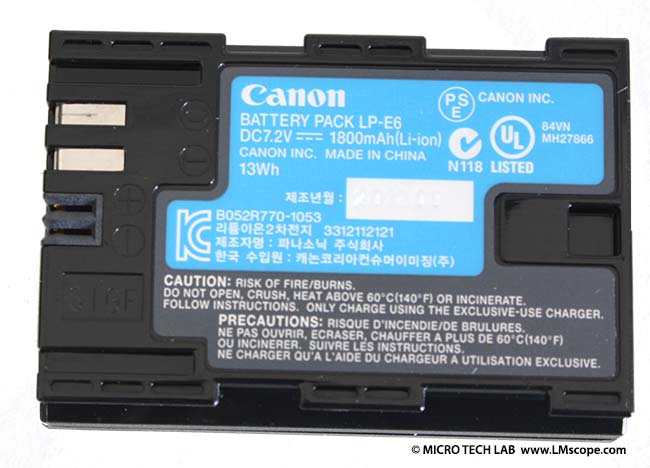 The battery is a 1,800 mAh lithium-ion battery and thus of average size. If the camera is used a great deal, it would be worthwhile to consider purchasing a power supply. As with the top professional models (Nikon D4 and Canon EOS-1D X , the Live View mode can be used without time limit. The power consumption in Live View mode is very high, which means that the battery is drained after around 1.5 hours. Furthermore, it should be remembered that the sensor becomes very hot on this setting and this may produce inferior image results or even damage the sensor.

For our test series, we attached the camera to the phototube of a Zeiss Axioscope and also to a Euromex Novex Zoom.

To connect the camera to the Zeiss Axioscope (left-hand image), we needed an LM Interface44, an LM TUST37C and an LM digital universal adapter DSLRCTC_Pro. A major benefit of the universal adapter is that it can also be used on eyepiece tubes with a diameter of 23.2 mm.

The camera was mounted to the Euromex Novex Zoom using an LM CMOUNT_1X_NX and an LM digital wide-field adapter DSLRCFC. For illumination we simply used two LED gooseneck lights from IKEA with clips. 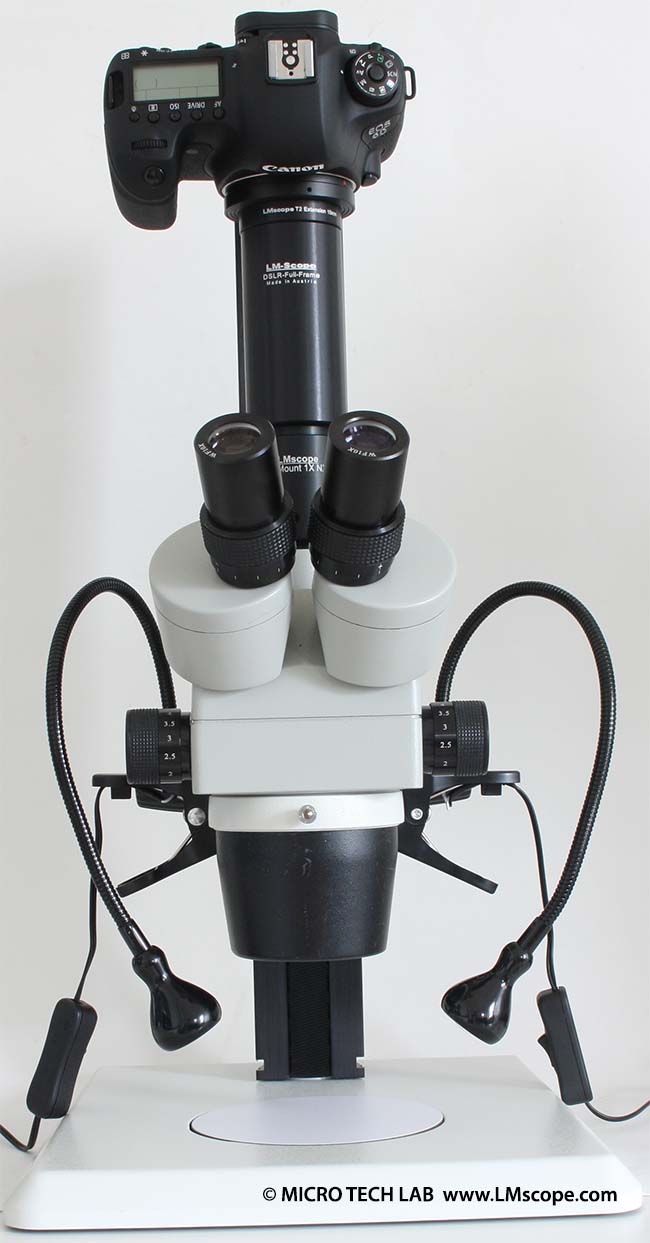 We used the following firmware: 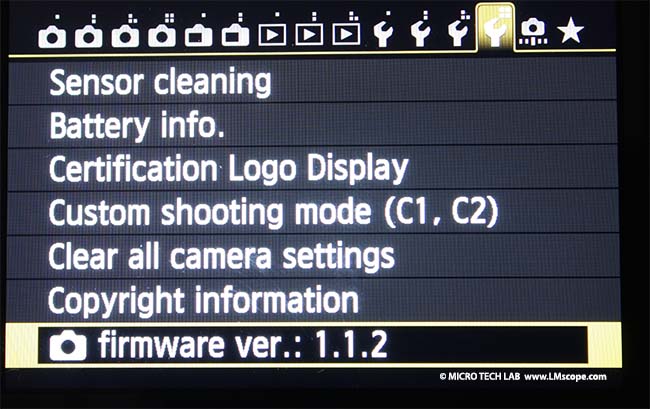 As already mentioned, the Canon EOS 6D has an integrated WLAN. This makes it very easy to control the camera via the Live View display, for example with tablets (Android or IOS). As a result, the images can conveniently be checked without the usual tangle of cables. Unfortunately, the app does not utilise the full resolution of iPads with retina display. Another downside is that the Canon EOS 6D does not have a conventional network connection (LAN) like the  Canon EOS-1D X or the  Nikon D4. Particularly when using the camera in highly sensitive areas, the security aspect should also be taken into account. Conveniently saving the images on an FTP network server is thus also not possible. Another point to consider is that at present, LAN connections are still significantly faster than WLAN connections. 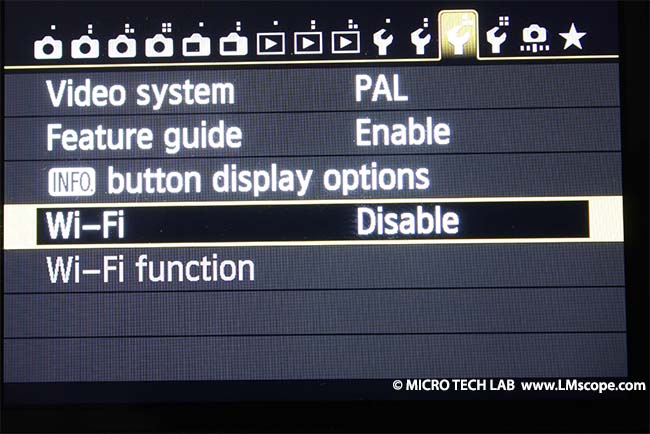 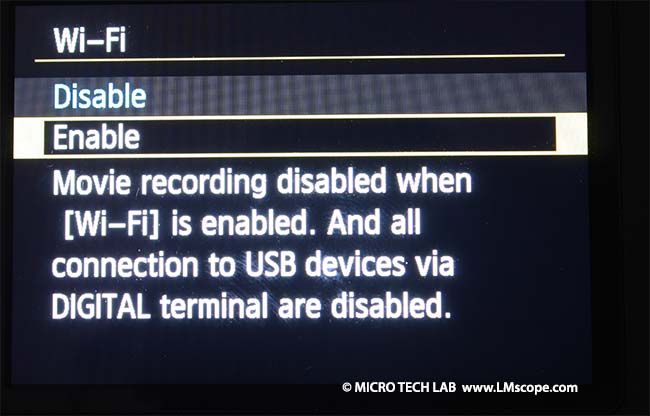 To save on battery power, the length of time after which the camera shuts off if not in use can be selected. Since this auto shut-off mode can also be completely disenabled, the camera is also suitable for continuous operation and photo traps. 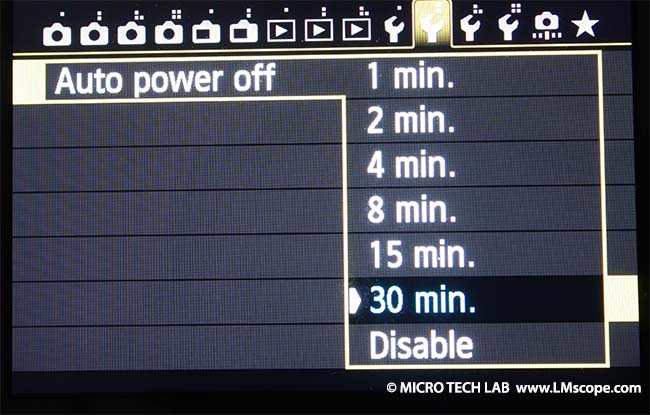 The Canon EOS 6D has a very high resolution capability and a very good signal-to-noise ratio. However, it must also be pointed out that the signal-to-noise ratio of the Nikon D4 and the Canon EOS-1D X is superior to that of the EOS 6D. ISO speed ranges from 100 to 25,600 (set automatically), and manually it can even be expanded from 50 to 102,400. The colour depth is 14 bits per channel, making a total of 42 bits, and the colour reproduction itself is very natural.  und der  schon besser ist. 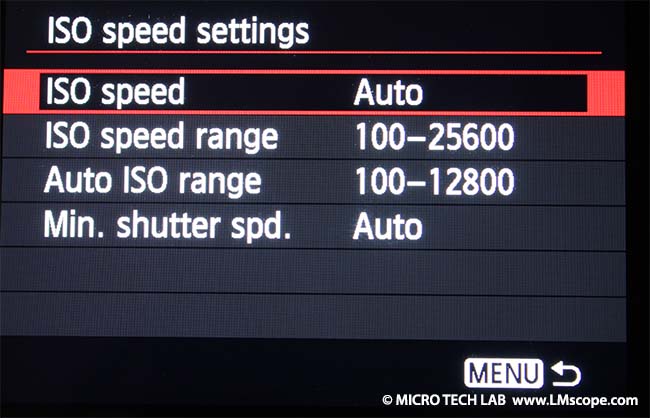 The camera has two separate motors for the mirror and shutter. This means that it is possible to only move the shutter and not the mirror when operating the camera in Live View mode (LV). With the lower-priced Canon EOS models (600D/650D/700D, etc.), the mirror has to be flipped down with the shutter to enable another exposure. The resultant mirror slap can cause image blurring. For this reason, the Canon EOS 6D is highly suitable for continuous shooting. As the shutter is very quiet anyway, only minimal vibration occurs. 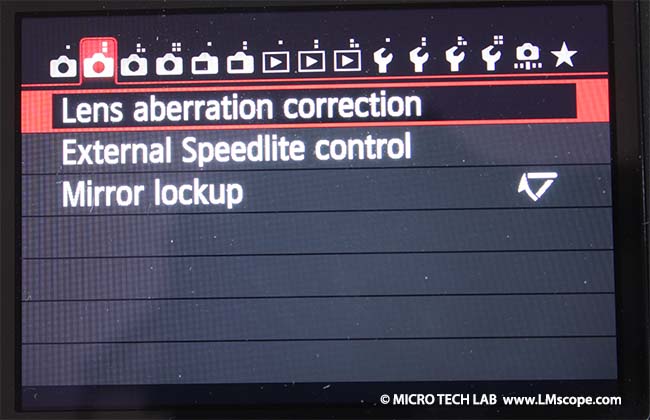 Unless images are captured directly in the Live View mode, the mirror lockup feature can be used. This function can be selected very easily via the menu and is particularly beneficial in microscopy, as additional vibrations resulting from mirror slap can be avoided. Furthermore, the Canon EOS 6D also offers the possibility of “silent shooting”. 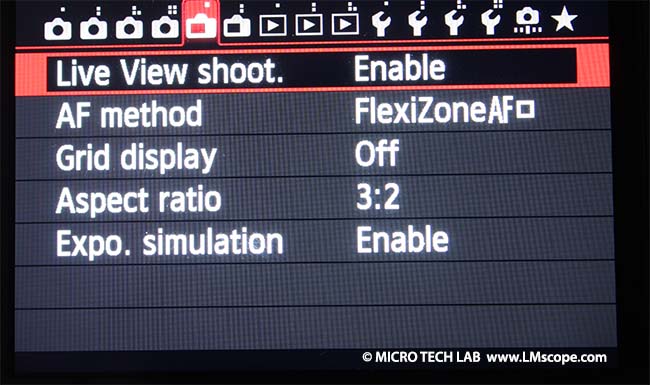 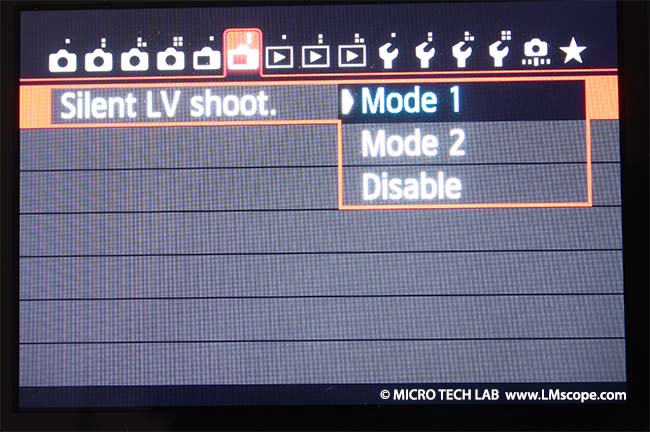 As with all cameras, the EOS 6D only shows its full potential in microscopy when it is used with the Canon EOS Utility software. This software is provided by Canon free of charge when the camera is purchased and makes working in the laboratory significantly easier.

Conclusion: The Canon EOS 6D is definitely a genuine alternative to expensive full frame cameras. Pricewise, at currently around € 1,800 (body only), it is probably still too expensive for the average microphotographer, but for highly ambitious photographers who want and are able to spend a little more money, it is certainly a worthwhile option. With the magnification function in Live View mode, an HDMI port and the option of controlling the camera from the computer, it possesses all of the functions that are important for working on the microscope.