The Canon EOS utility software (tethering) via USB or LAN

In each of our test reports on Canon cameras, we have mentioned the Canon EOS utility software program which enables users to conveniently control their Canon cameras from the computer. For this reason it is high time that we put this program under the spotlight.

Computer programs for controlling cameras via the PC are of key importance in microscopy. This is not only because working on the computer is considerably more convenient than constantly having to jump around in the camera menu, but also the image quality in microscopy is significantly influenced by a large variety of factors and quite a few of them can be reduced or completely eliminated in this way. A very big advantage is that the photographs are immediately available on the computer's hard drive in full resolution and can be looked at in the viewer. In addition, thanks to the Live View image on the PC, it is possible with the magnification function (zoom) alone to achieve better results in much less time. 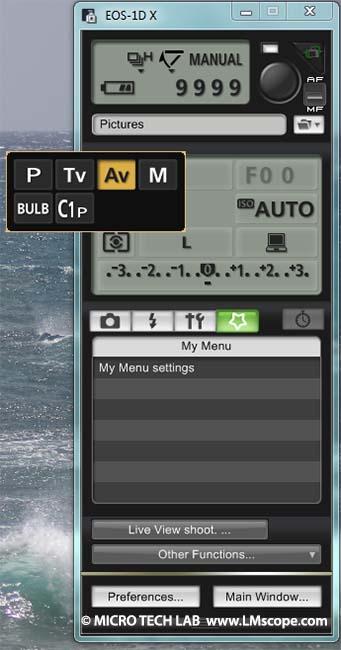 When the program is opened (or the camera is attached to the USB interface), then this bar appears on the screen. Here, it is best to select the Av setting for automatic aperture control (optimal exposure time is selected by the camera itself) and to activate the Live View mode (Live View shooting button). 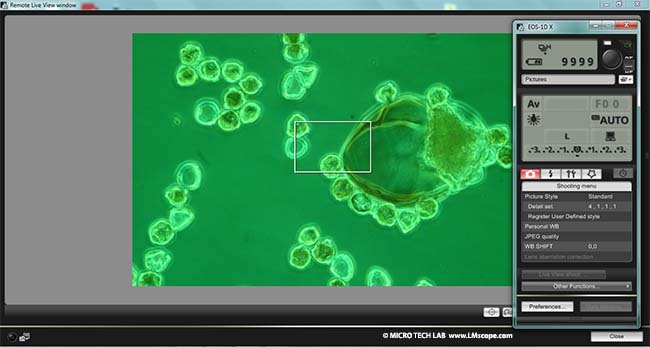 In the illustration below, we have enlarged the image using the magnification function in Live View mode. This makes it very easy to set the desired focal plane. 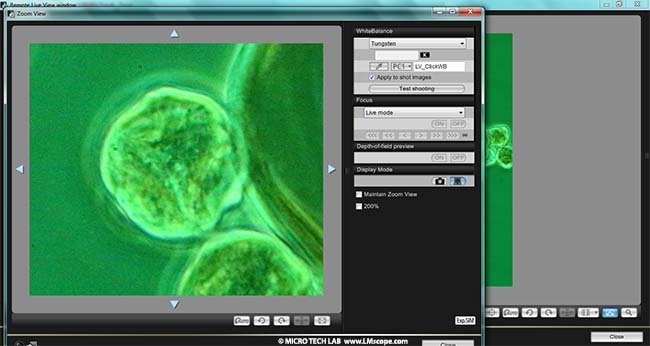 Another advantage is that the images can be discussed with several people as they appear live on the PC monitor, and they can even be used for presentations with a projector. The images and video sequences can be stored directly on the hard drive, cutting out an entire processing step. With the Canon Image Browser or any other viewer software of your choice, the photographs can immediately be examined in full resolution. 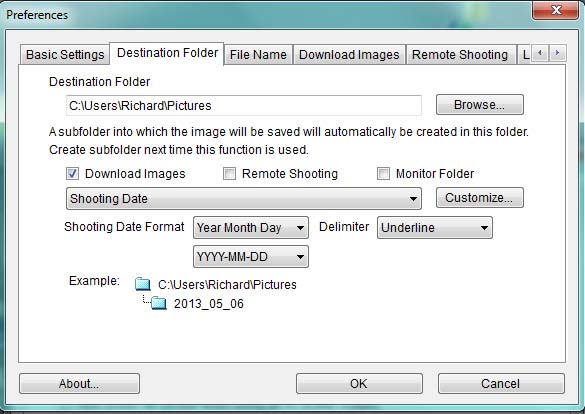 The user can choose the path under which the photos are saved on the hard drive.

We have made some screenshots of the most important setting options: 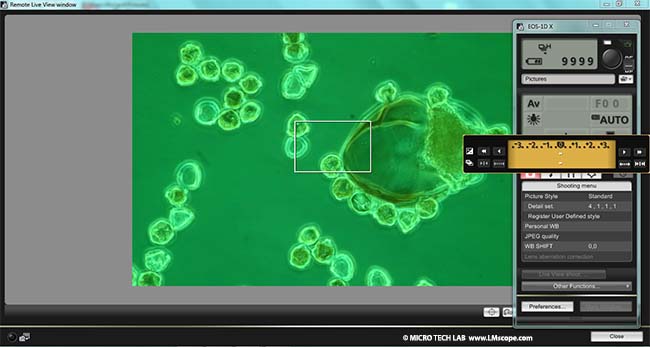 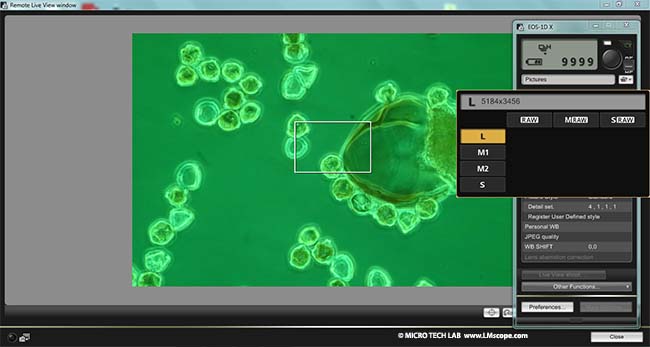 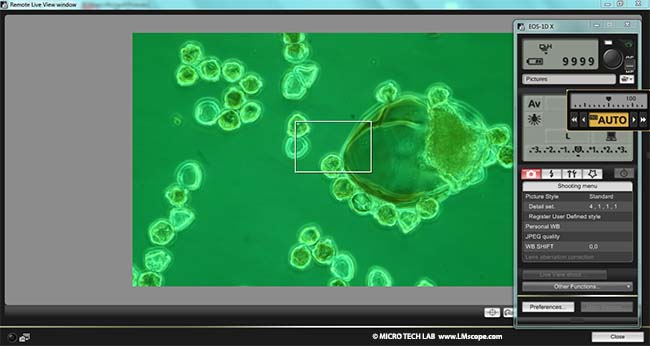 White balancing on a light source: 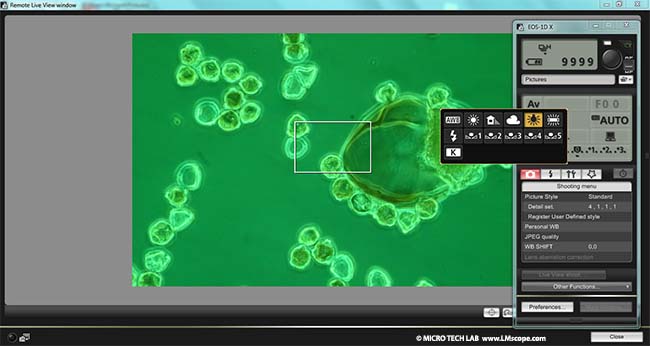 Setting a white point using the pipette symbol (2 photos): Select a point in the background that should be white, click once and the program will optimally adjust the photos that follow! 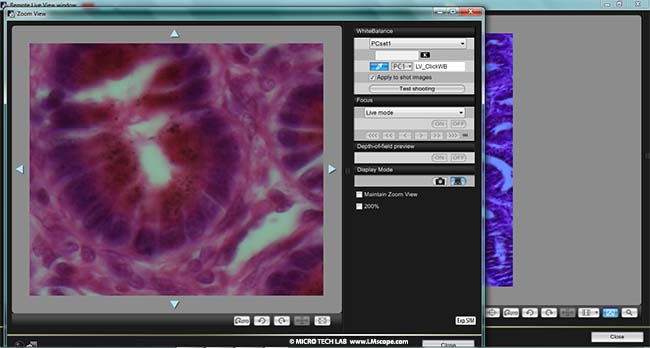 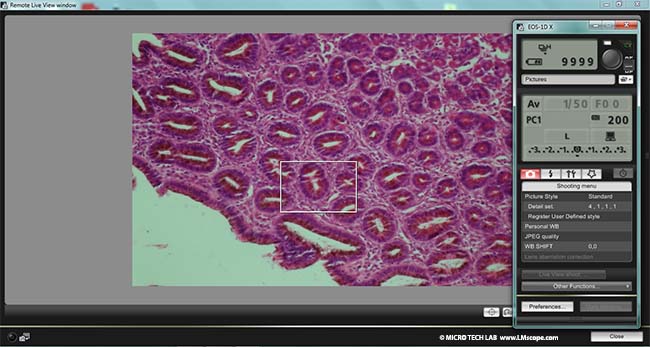 For our documentation of the EOS utility software, we used the Canon EOS 1D X. This model is a special case, as it has a network LAN connection, which means that the camera can also be controlled over greater distances. With all the other Canon EOS cameras, the program starts automatically; it is only with this one model that the PC has to be connected to the camera after the program has started. An additional application, the WFT Pairing program, is used for network communication. The camera itself can be controlled very smartly via the camera’s IP address. Once everything has been set up, communication via the network is as easy as via the USB cable. 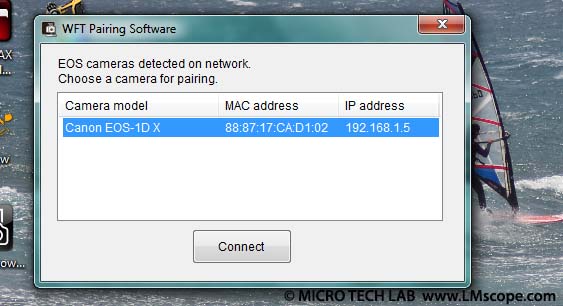 Conclusion: A great software program included by Canon free of charge with the purchase of its cameras. It works with every Canon EOS camera with Live View capabilities and is available both for the Mac and the PC. Especially for cameras that have no moveable display, using the EOS utility is a must!