A comparison of CCD and CMOS sensors 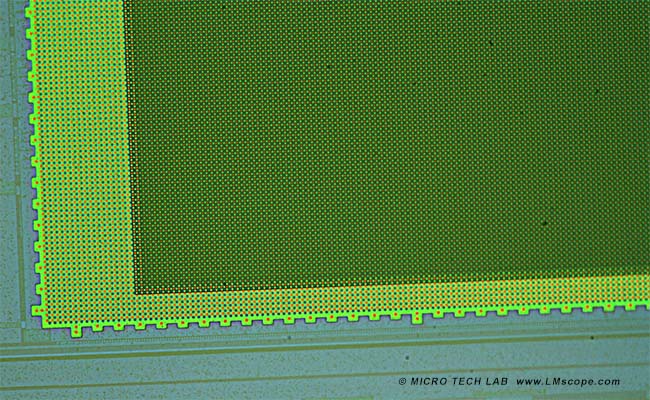 The CCD (charge-coupled device) technology was developed as early as the late 1960s and originally was intended for data storage only. However, due to the sensors’ extreme sensitivity to light, they soon began to be used in cameras, too. CCD sensors consist of a matrix of light-sensitive photodiodes. In simplified terms, CCD sensors convert light into electrical signals. When light falls on the photocell, an electric current is generated which has a linear correlation to the amount of light (intensity and duration). The photocells collect their charge proportional to the amount of incident light. After exposure, the charges are shifted incrementally from cell to cell (read out) until they reach the output amplifier, which converts them into a voltage signal that corresponds to the amount of light.

A CMOS sensor (complementary metal oxide semiconductor) collects the charges produced by incoming light, just like a CCD sensor. The main difference between CMOS and CCD sensors is the way information is transferred. In a CCD device, the charge is transferred by rows, while CMOS devices convert the charge to voltage at each pixel. For this reason, CMOS sensors are faster because the pixels are read out in parallel while CCD sensors read out pixels sequentially.

Several years ago, it used to be argued that CCD sensors produced much better-quality images in terms of light sensitivity and dynamic performance. For this reason, CCD sensors were primarily used in the superior grade camera segment. The drawbacks were that they were much more expensive to manufacture, consumed more power and generally had slower readout rates than CMOS sensors.

Over the past 10 years, however, CMOS technology has caught up considerably. Due to the markedly higher level of demand in the camera market, a lot of money was invested in the development of CMOS sensors. The previous shortcomings of CMOS sensors in comparison to CCD sensors have gradually been overcome and their advantages can no longer be ignored:

Due to the success of CMOS sensors, CCD technology was pushed to the peripheries of photography. CCD sensors mainly offer advantages for specialised applications, such as black and white systems, low light shooting, or documentation of slow processes and stationary objects.