The Canon EOS 70D has been on the market since August 2013, three years after the introduction of the Canon EOS 60D. Externally, the two models are very much alike. We were especially interested to see whether there were any significant innovations in comparison with the predecessor model that were also relevant for microscopy applications. 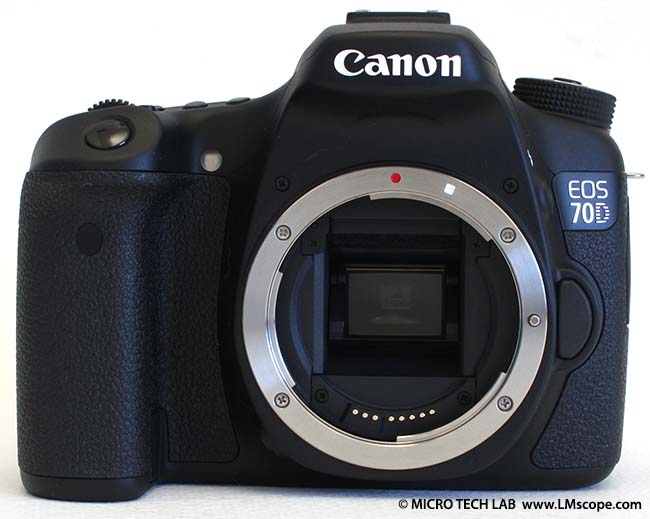 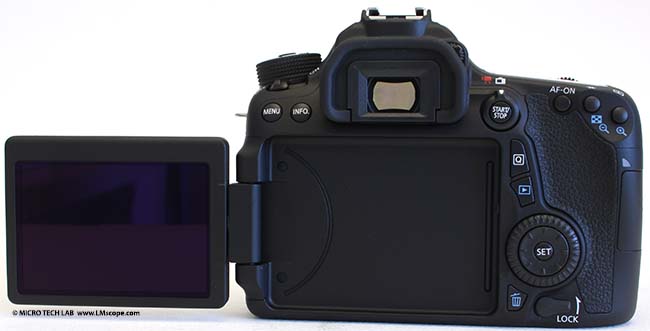 Looked at from the outside, there is no evident difference from the predecessor model, the Canon EOS 60D. Both models fit well in the hand and weigh about the same amount (755 grams without the lens). As was the case with the predecessor model, the Canon EOS 70D has a tilting and rotatable screen which is also touch-sensitive. This is an innovation that has been taken over from the Canon EOS 700D and 650D. While this feature is indeed a development, it is not relevant for the highly specialised mode of use in microscopy. In microscopy, any contact with the camera should be avoided in order to preclude vibrations and motion blurring. Nevertheless, we found the touchscreen to be very useful when configuring the network during operation and especially when controlling the camera from the computer. 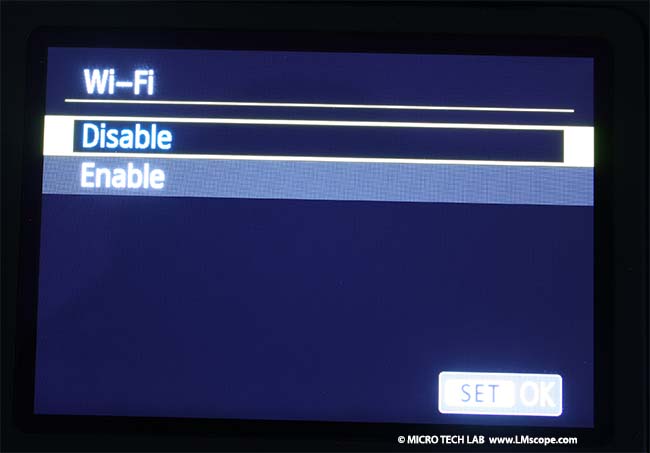 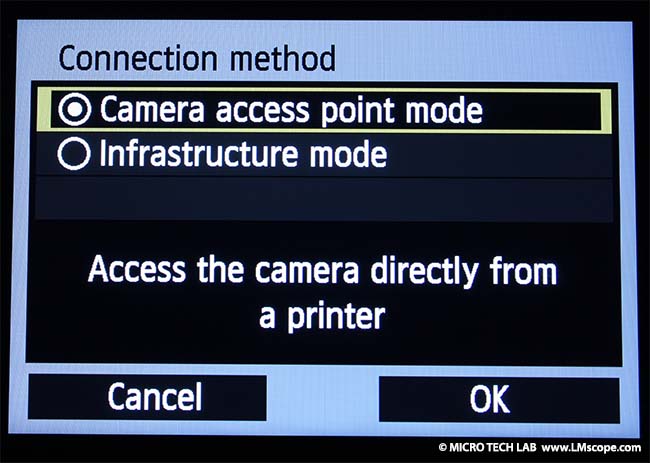 The APS-C sensor used in the Canon EOS 70D is also a new feature. It has a resolution of 20.2 megapixels. ISO sensitivity covers a range from 100 to 12,800 in automatic mode, and reaches 25,600 in manual mode. The colour depth is 42 bits. Also new is the integration of the WiFi module. This is a very handy means of controlling the camera wirelessly from a computer, tablet or smartphone. As with all Canon models, the software (EOS Utility) for controlling the camera remotely from the computer is already included in the purchase price.

The Canon EOS 70D has a large buffer memory, which means that a high continuous shooting rate is possible. The frame rate is approx. 7 frames per second and thus considerably faster than even the Canon EOS 60D. 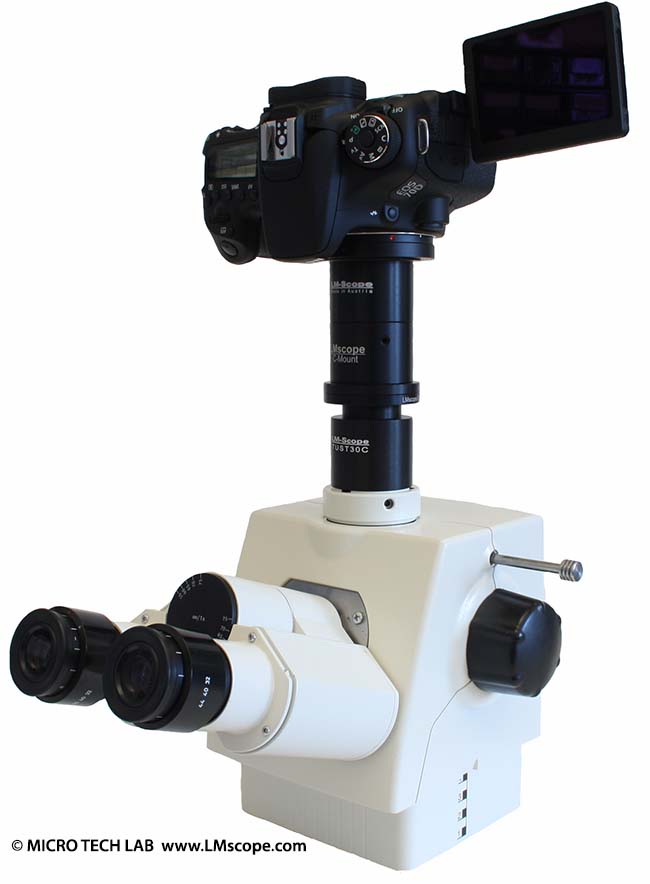 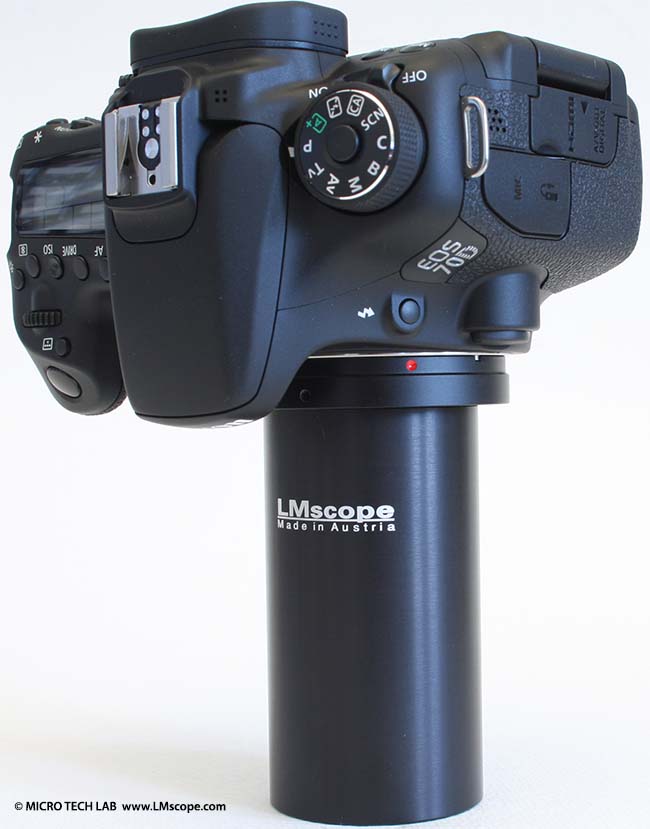 Connecting the camera to a microscope (stereo microscope, laboratory microscope or macroscope) is a snap when using our LM digital adapters. To select the right adapter for your microscope, please use our configurator or send us an e-mail with a photograph of your instrument. 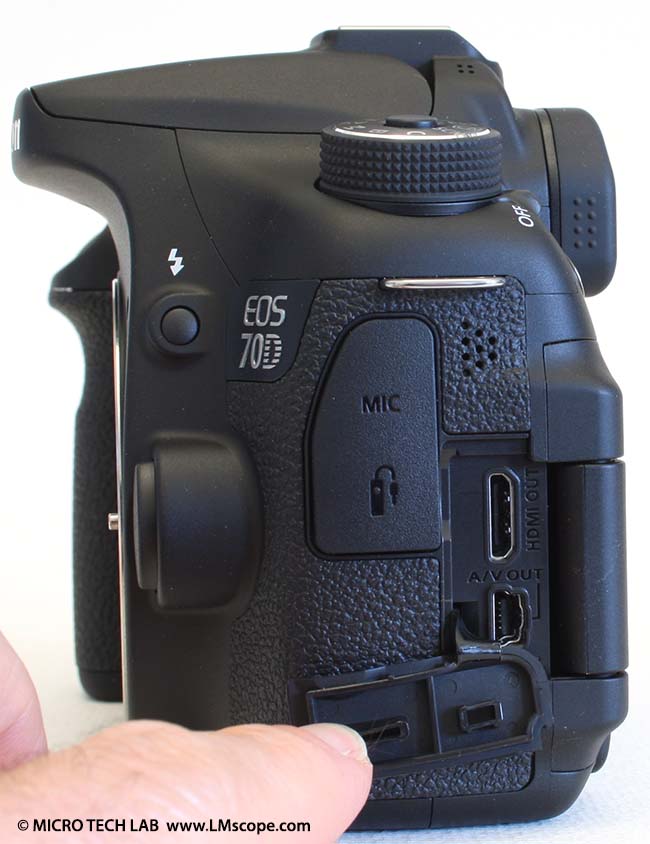 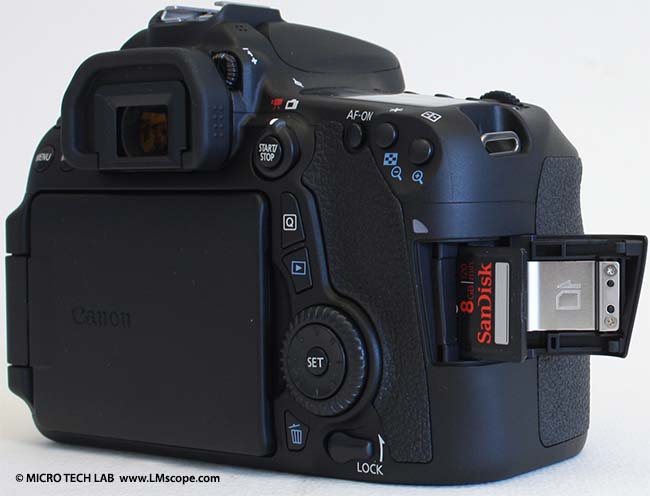 Of course, the camera has an HDMI connection for live video display on a monitor or projector. The card slot is unspectacular – the usual slot for SD-format memory cards. Unfortunately, there is only room for one memory card. 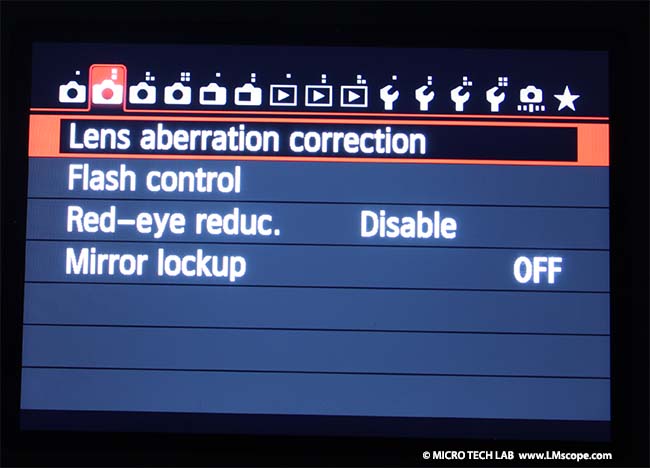 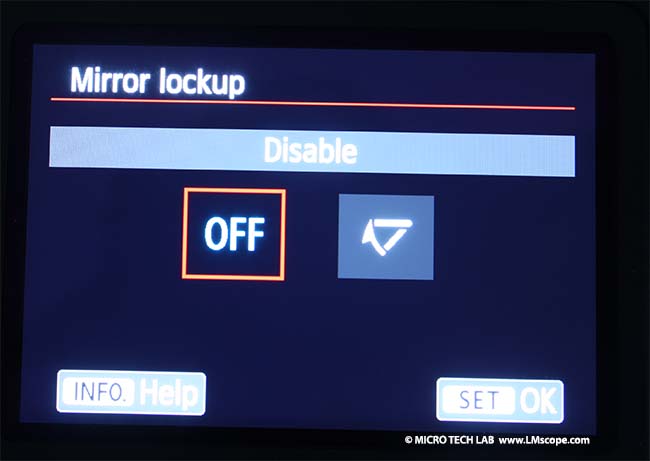 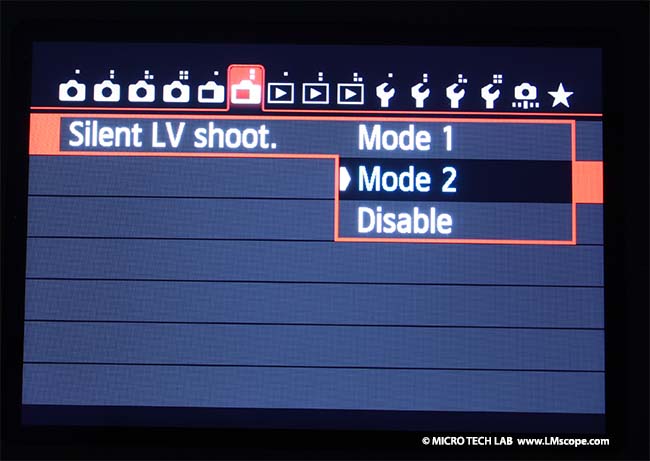 The camera has mirror lockup, and is also possible to select a quiet mode (Canon calls this “silent shooting”) which can be set up via the menu. These features are highly advantageous in photomicrography, especially in poor light conditions and when shooting moving objects, because they make it easier to avoid shaking and blurring. 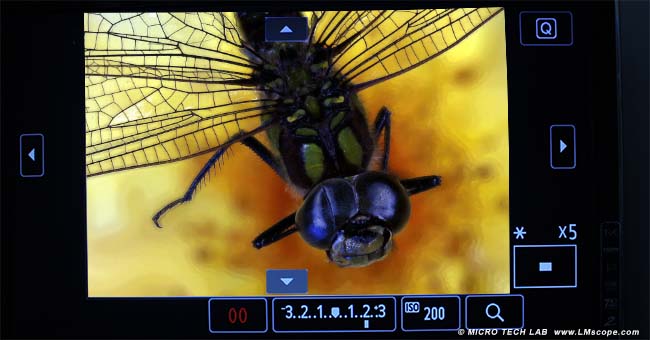 The Canon EOS 70D, like all more recent Canon models, has a Live View mode in which the magnification function (5x and 10x) can also be used. This makes it very easy to optimally focus the image. 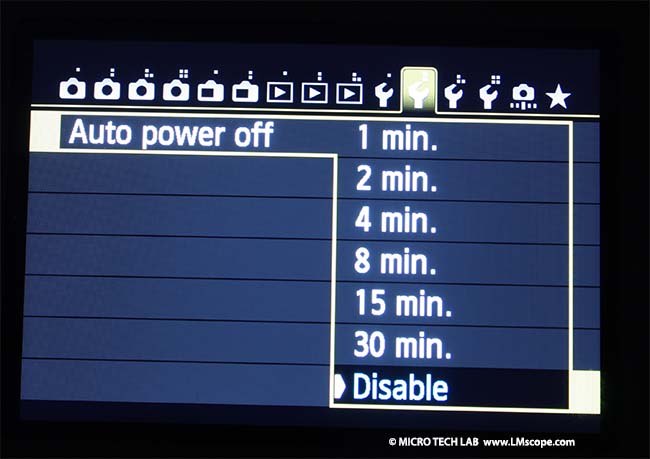 As with the predecessor model, the Canon EOS 60D, the auto power off feature for the Live View mode can be disabled if necessary. 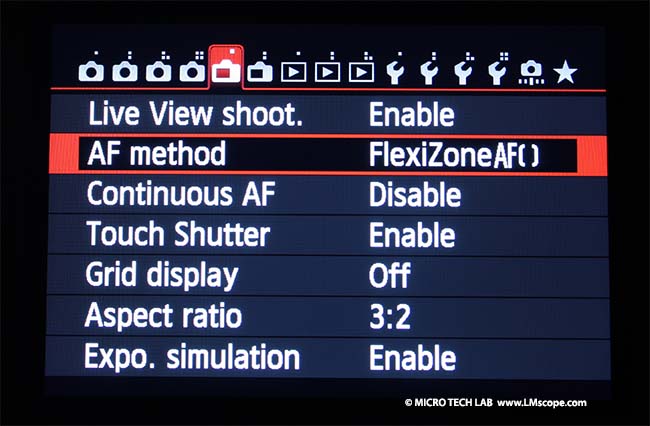 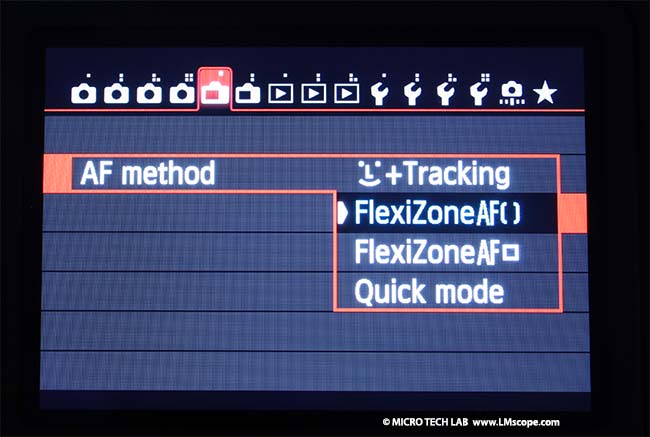 If the user wants to control the magnification function in Live View mode via the Canon EOS Utility software, the AF method must first be changed to FlexiZone in the menu. 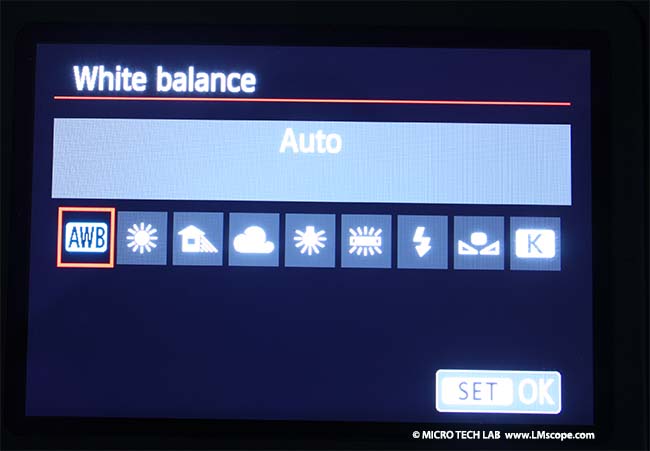 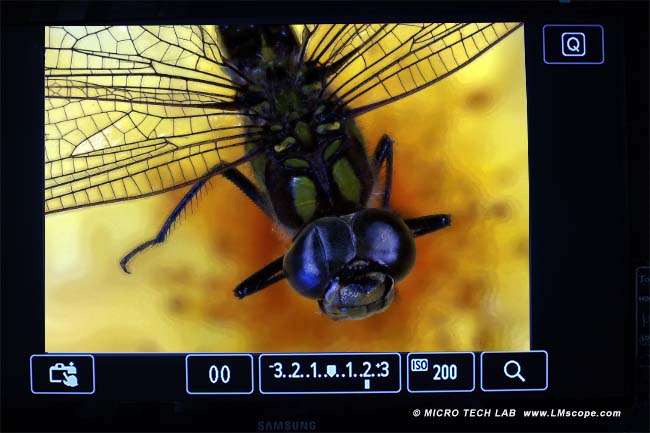 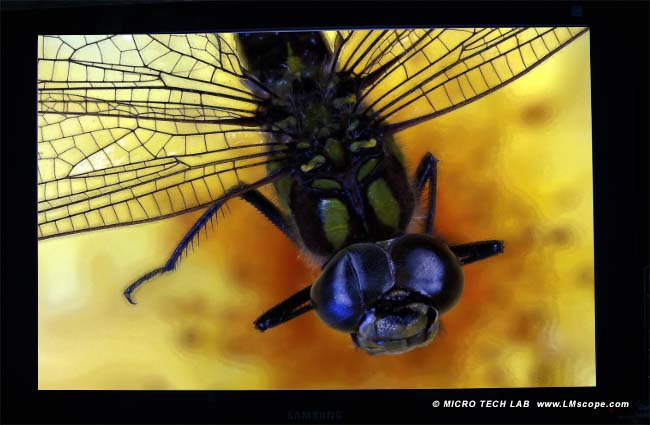 If displaying the images on an HDMI monitor, they can also be shown without information texts.

With the EOS 70D, Canon has succeeded in producing a good update for the EOS 60D. The new model has a larger, better sensor, a WiFi connection, and the screen is touch-sensitive. The Canon EOS 70D benefits from a number of new functions that also play an important role in microscopy.