Sony Imaging Edge: a useful software suite for controlling Sony DSLR and system cameras remotely from a PC or Mac

The Imaging Edge software allows navigation of Sony’s current Alpha series cameras via PC or Mac – a very convenient tool since the ability to control the camera remotely is particularly important for the specialised areas of photography we are interested in: photomicro- and photomacrography.

Sony’s mirrorless system cameras are among the best performers in the market. With our LM microscope adapters, they can be attached to a microscope in a few easy steps. Particularly outstanding features of these cameras are their superior image quality, ease of operation and excellent price-performance ratio.

Operating the camera via a PC or Mac is very convenient and ergonomic, especially when the camera is attached to the phototube of a microscope. The Live View image is displayed directly on the computer monitor and can be controlled and configured remotely. It just takes a mouse click to release the shutter, and the image captured can be stored directly on the PC’s hard drive or online in the cloud.

The connection for remote capture (tethered shooting) can either be wired (using a USB cable) or wireless via Wi-Fi/WLAN. Sony’s Imaging Edge software is a combination of three photography applications: “Remote”, “Viewer”, and “Edit“. It can be downloaded for free from the Sony website. This is a particular advantage if cameras are to be tethered to several computers. 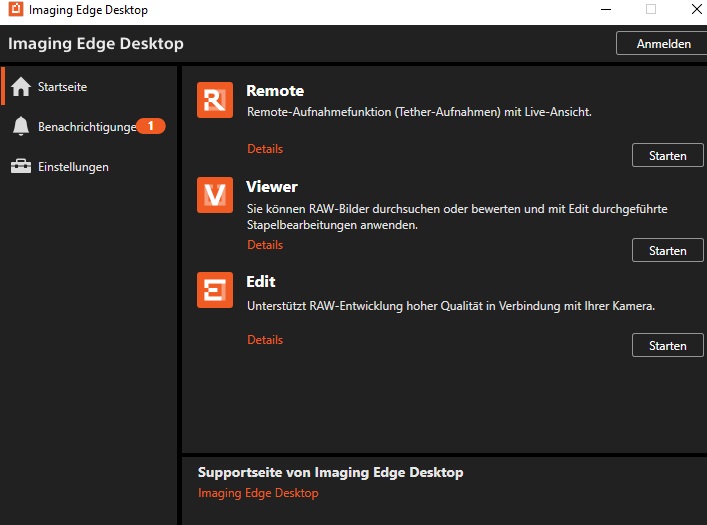 We downloaded version 3.1.00.01080. Other versions may be slightly different.

The test report below provides a step-by-step walkthrough of the settings that are most important in photomicrography.

Once the program has launched, you can search for and select the camera you would like to use. We used a Sony Alpha 6600 for our test. In Imaging Edge, the camera is called “ILCE-6600”. Once selected, the camera is accessed and connected to the PC: 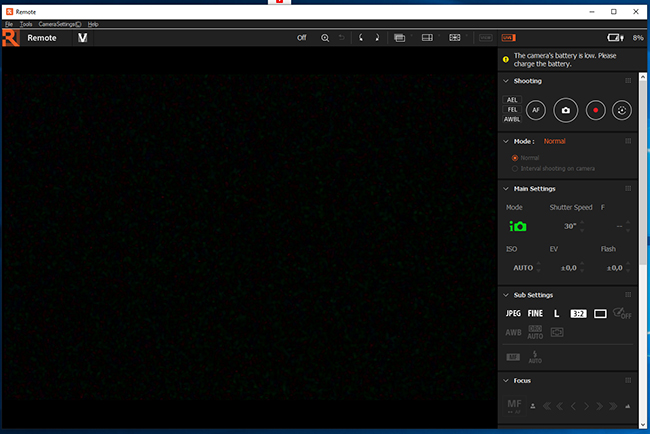 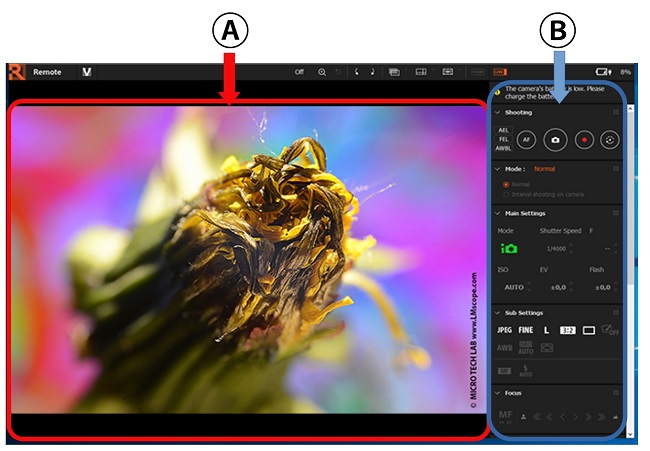 The other two components of the software suite – “Viewer” and “Edit” – can also be launched from the “File” menu tab. 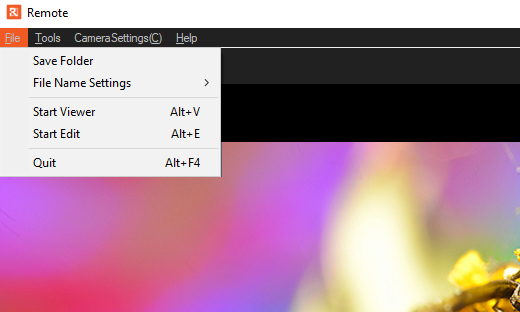 The settings for the software and the camera can be adjusted in “Tools” and “Camera Settings”: 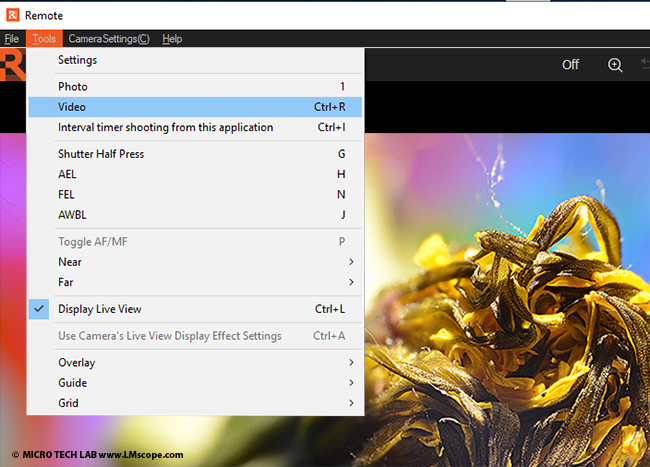 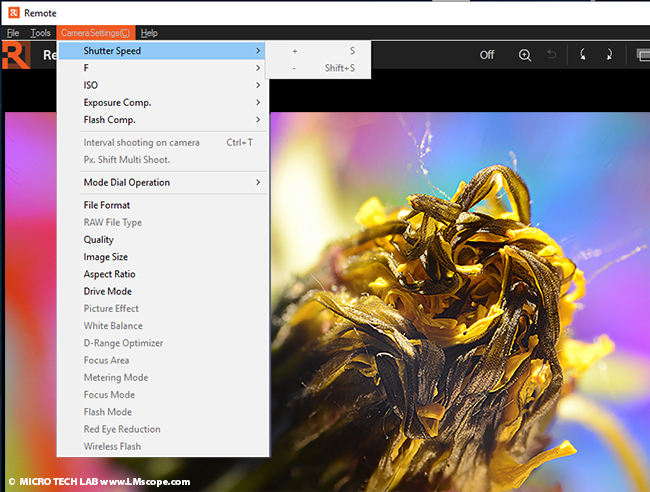 In addition to the menu tabs, the most important settings can also be adjusted by using the buttons on top of the Live View screen and from the operation panel.

Overview of the settings on top of the Live View screen

The focus magnifier is very important and useful for focussing the image: 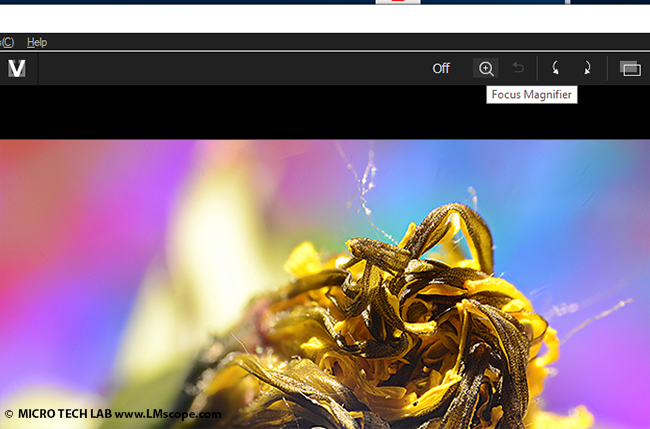 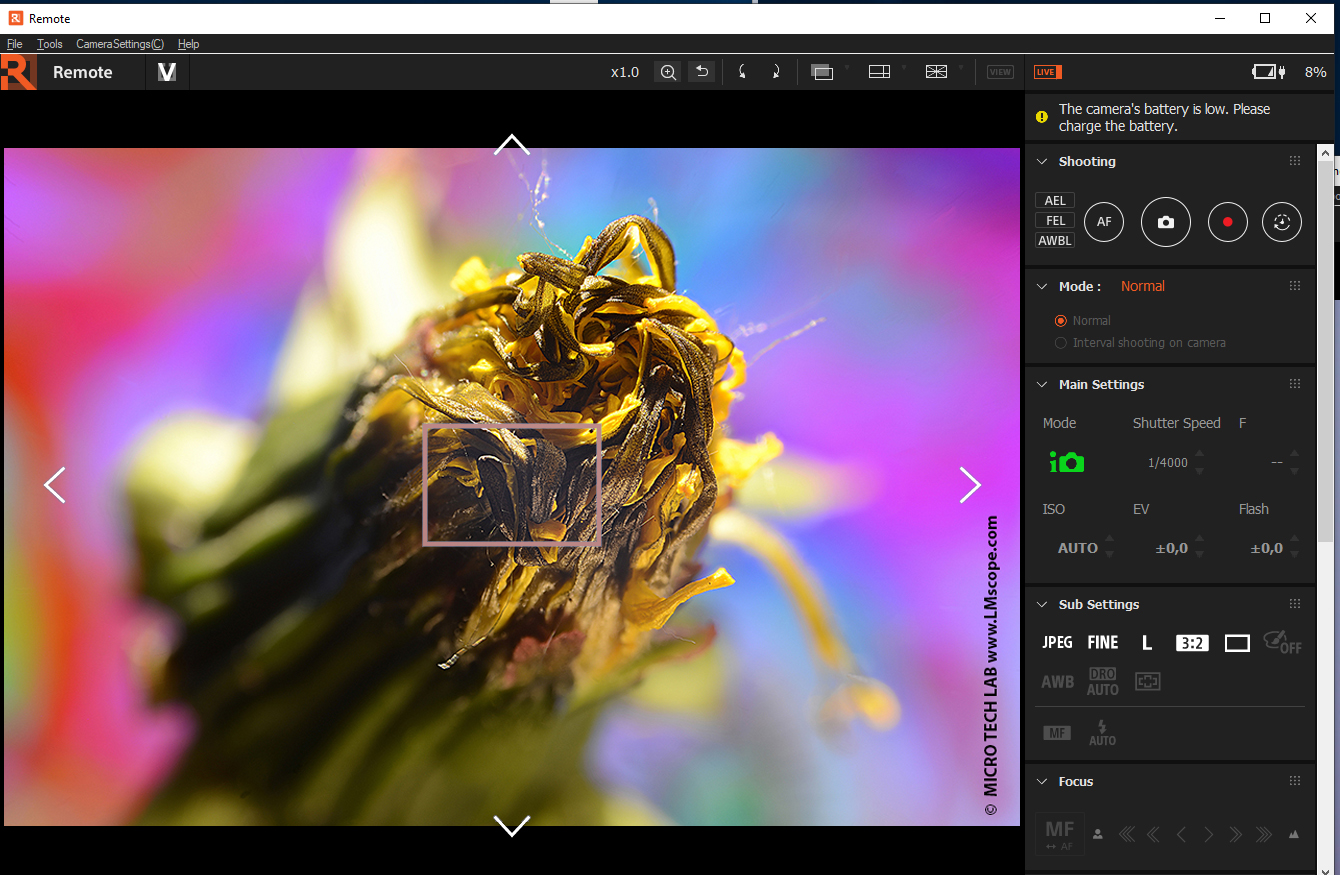 Shown in the photo: the image 5.9-times enlarged 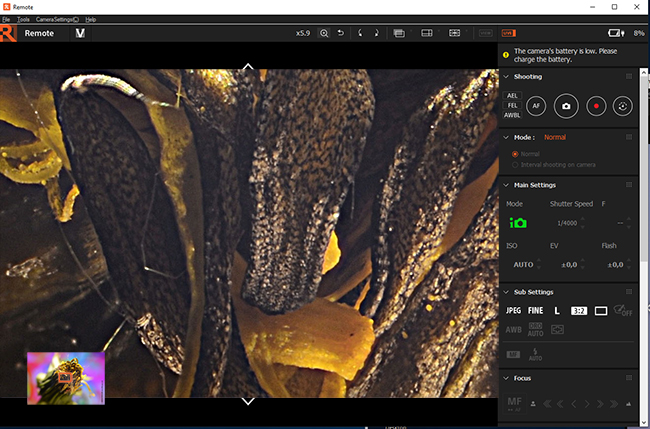 The Live View image can also be rotated. The overlay option is another convenient feature, which allows any object (e.g. a ruler or other scale marks) to be placed over the image displayed in the window. Overlay guide lines are also very useful in many cases. 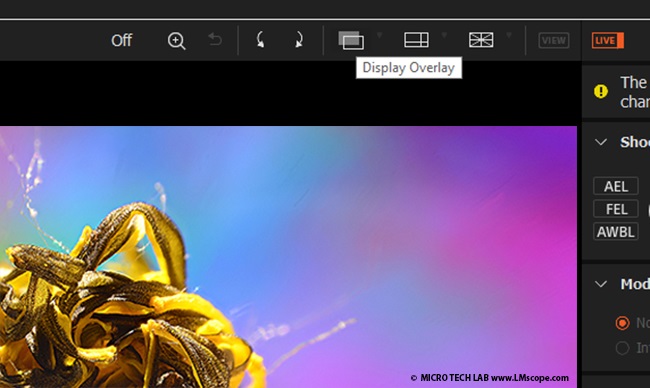 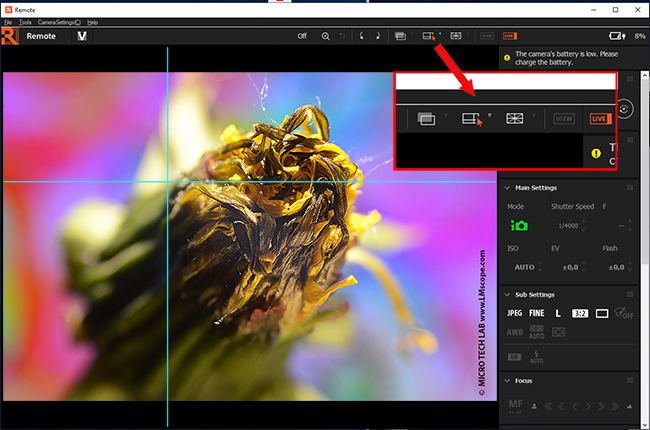 The grid option can be used to place gridlines over the image. 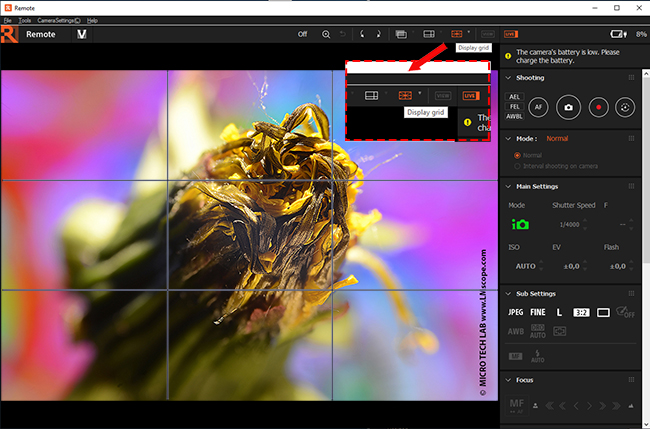 The operation panel is arranged into a number of groups: 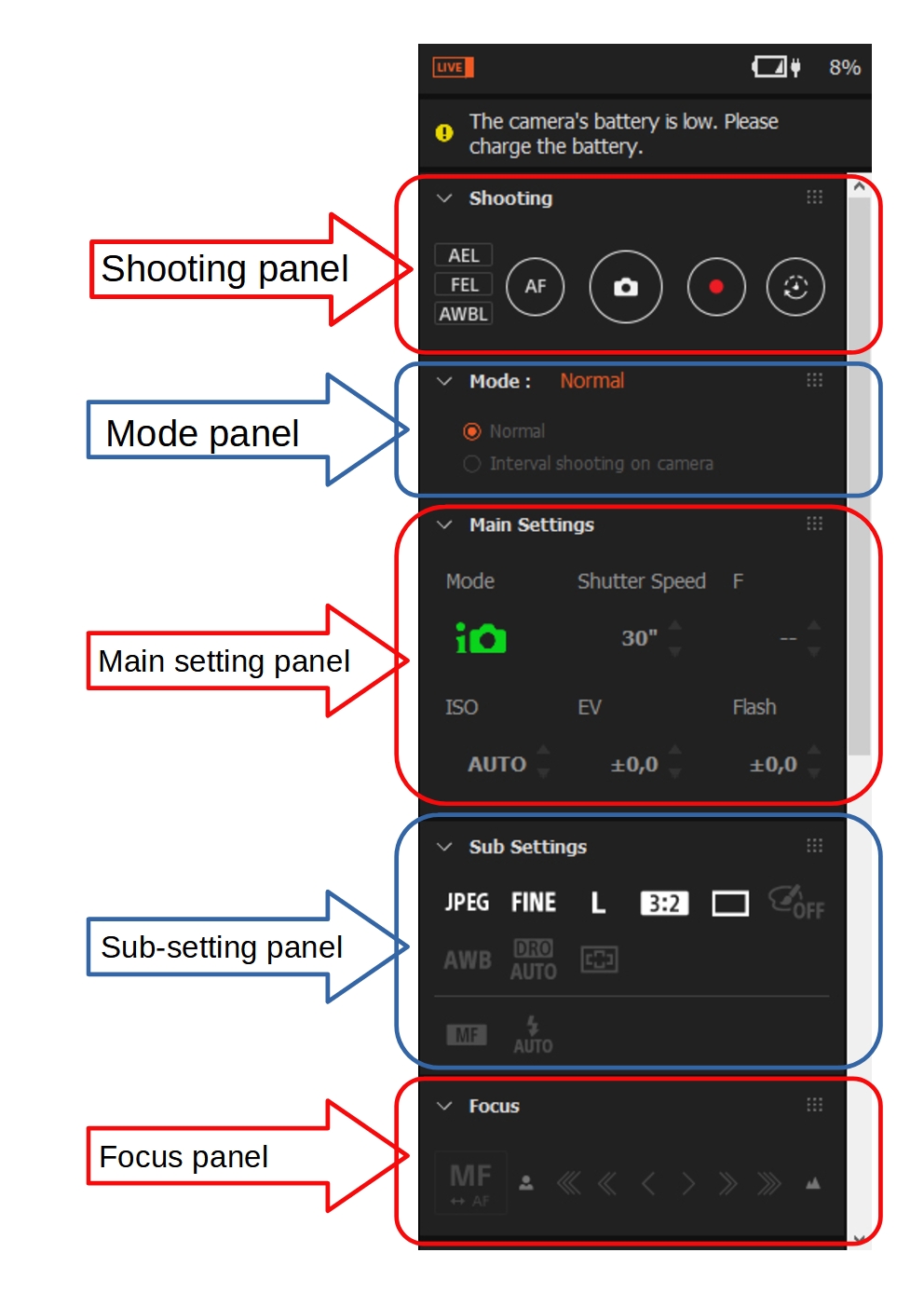 1.) Shooting panel
The functions contained in this panel include the button for releasing the shutter and the movie button. 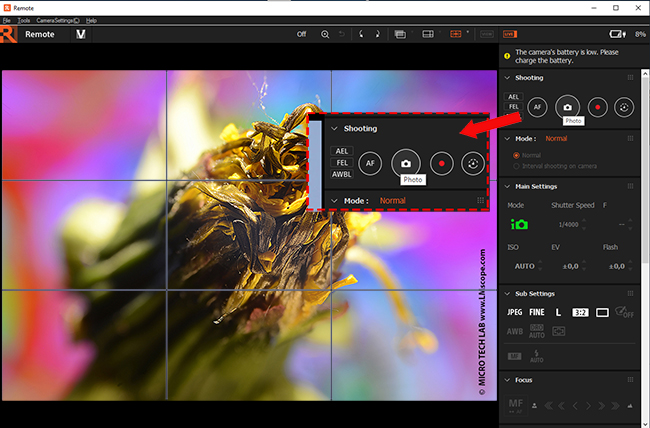 Interval timer shooting: We recommend pausing for one to two seconds after each capture, in order to avoid any unwanted motion blur. The camera’s focal-plane mechanical shutter that controls the exposure time causes only minimal camera movement. A focal-plane mechanical shutter is not required for taking photos of static specimens. The capture interval and the delay after each capture can be set in the Interval Timer Shooting menu. 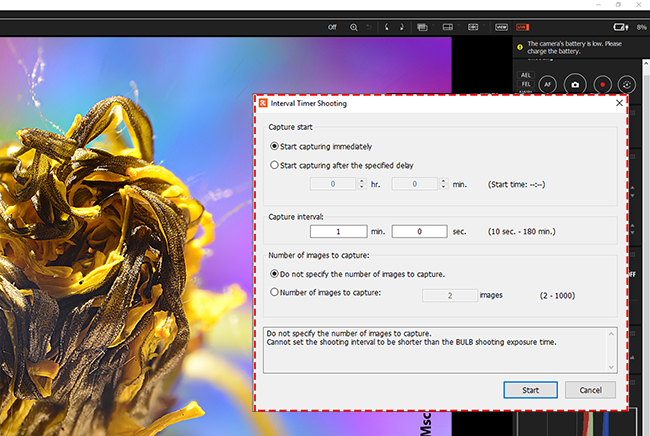 4.) Sub-setting panel
This panel contains the settings that are particularly important for photomicrography:

The file format and aspect ratio of the image to be captured can be changed at the touch of a button. Images can be saved in RAW, RAW-J and JPEG format. 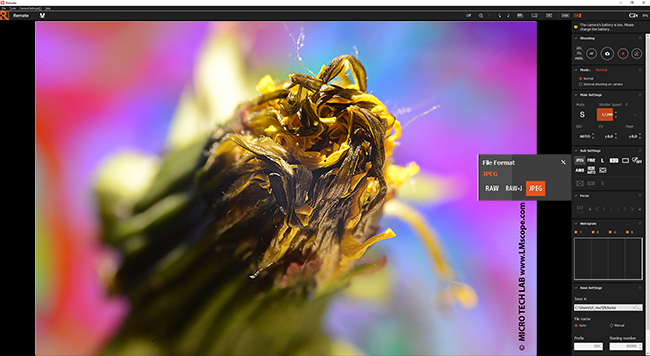 The image quality can also be defined: 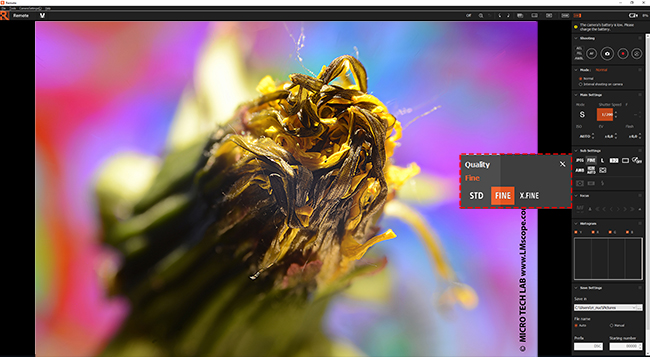 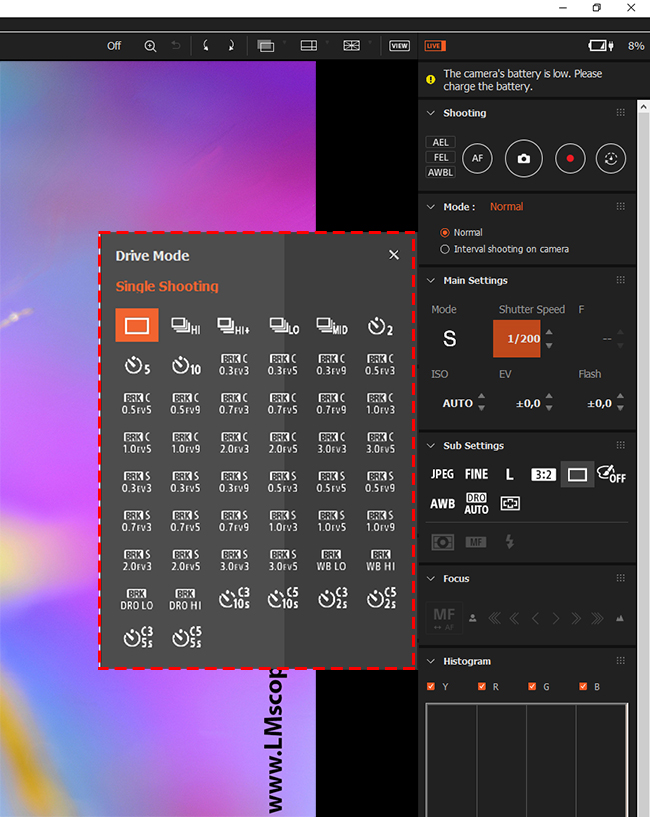 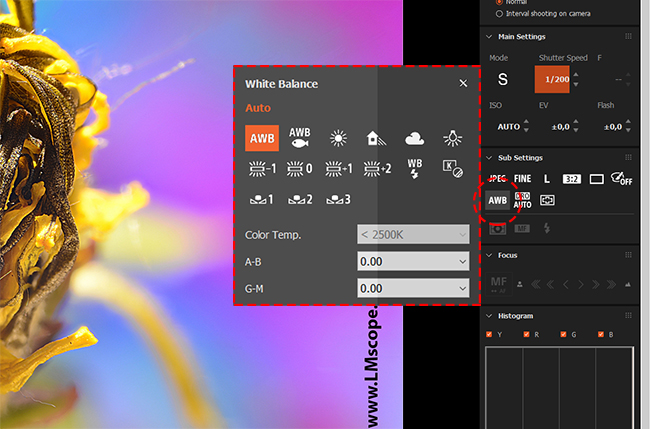 In the Imaging Edge Viewer, saved images can be opened, viewed and edited. 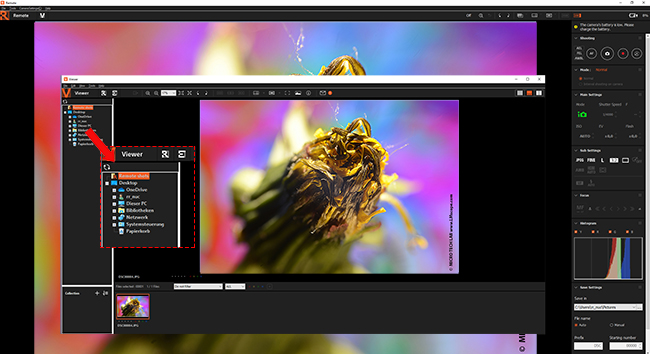 An overview of the supported devices is available on the following Sony website: https://support.d-imaging.sony.co.jp/app/imagingedge/en/devices/

Conclusion: For professional laboratory and studio work on the microscope, we recommend using the Sony software. It enables the camera to be comfortably and effortlessly controlled from the computer, which in turns produces a notable increase in image quality.