In photography, a shutter is used to control exposure time. It has a significant influence on image quality.

The vast majority of cameras have a mechanical shutter. During the exposure time, the shutter is opened briefly to allow the optimal amount of light to reach the sensor. After this, the shutter closes again. When capturing moving objects, short exposure times are particularly important. If the exposure time is too long, the image will appear blurry because the objects are moving too fast in relation to the time when light from the scene is collected. Modern DSLRs offer shutter speeds of up to 1/8000 of a second.

shutter is open - sensor is visible 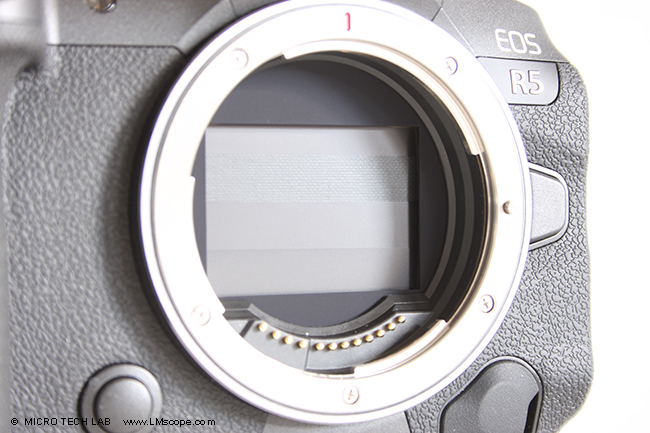 If the selected exposure time is too short, the image will become too dark and few details will be visible. In a perfectly exposed image, even minor differences in brightness are visible. Usually, exposure time is controlled by a feature called automatic exposure mode. For special applications, the exposure can also be set manually. In most cases, bright lighting conditions (high levels of illumination) are recommended as these allow short exposure times with maximum utilisation of the sensor’s dynamic range.

The fact that the sensor is mechanically covered has the advantage that the image sensor can be completely reset to a nominal stage and the image signals are read out in their entirety after the shot has been taken. This produces shots with optimal image quality and sharpness. Without this mechanical element, re-exposure occurs while the image is being read out row by row, resulting in lower resolutions and more blur in the case of moving objects. In cameras with digital shutters, the sensor is exposed and the image information read out continuously. Most video cameras have a digital shutter. At the beginning of each exposure, a digital reset is performed. During this process, all pixels are set to zero, exposed and then read out row by row. The sensor receives light throughout the process. The images are stored at a rate of 25/30/60 frames per second and the exposure time is always the same, regardless of the lighting conditions. A major disadvantage of the digital shutter is that fast moving objects cannot be imaged with ideal sharpness. These distortions are called rolling-shutter effect.

Most microscope cameras (C-mount) do not have a mechanical shutter. This is a major disadvantage compared to DSLRs because fast moving processes and specimens (e.g. sperm cells, etc.) cannot be captured without predictable distortions. Even with non-moving objects, external vibrations (caused, for example, by operating the microscope, table surface vibration, etc.) can cause blurring as re-exposure occurs while the sensor is being read out (i.e. during storage of the image data).

With a digital shutter, there are two ways to capture sharp, crisp images of fast-moving processes:

These are special cameras for capturing extremely fast image sequences, achieving several thousand frames per second in slow motion. The electronic system of these cameras is extremely fast, capturing vast amounts of data within short periods of time, which comes at the cost of lower resolutions. High-speed cameras can only have a digital shutter as a mechanical shutter would be much too slow to capture moving specimens. In most cases, these special-purpose cameras are also very expensive.

DSLRs, on the other hand, allow optimal control of the exposure time, making it possible to capture moving objects at superfast shutter speeds of up to 1/8000 of a second.