The ISO value indicates a camera sensor’s sensitivity to light. The lower the ISO number, the less sensitive the sensor is to light. High ISO values, on the other hand, mean that quality images can be created even in low light conditions. In analogue photography, the ISO specification denotes the photosensitivity of photographic plates and films, which undergo a chemical reaction when they come into contact with light. Photographers working in analogue should select the photosensitivity of their film in advance, before starting a project, since it is tricky to change films while working. With digital cameras, there are no chemical changes to the sensor and the ISO sensitivity can be set differently for each picture. When light hits the sensor (semiconductor chip), an electrical charge proportional to the amount of light is released and stored. This is called the photoelectric effect (electrons are emitted by a semiconductor exposed to light). At the end of the exposure process this voltage (electrical charge) is read by the sensor and processed. 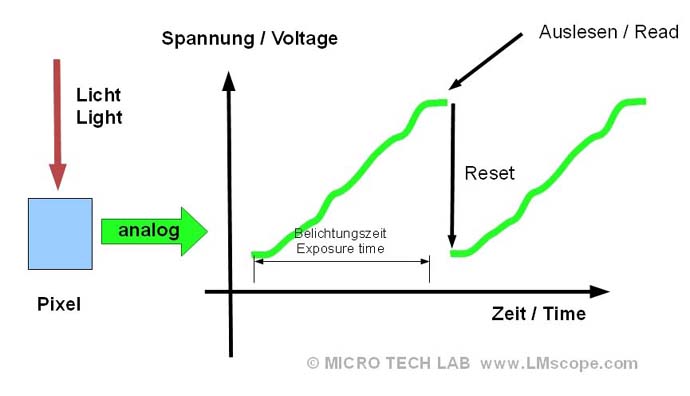 ISO settings have a direct influence on the amplifier before the analogue-to-digital converter (ADC): high ISO numbers give more amplification, while low ISO numbers give less amplification. The camera sensor itself always maintains the same degree of sensitivity; only the level of amplification changes. Depending on lighting conditions, the ISO setting will either be selected automatically by the camera or can be changed manually.

The drawback of increased light sensitivity is an increase in noise – the image loses contrast and appears blurry. Noise levels are strongly influenced by the quality of the camera used. High ISO settings are therefore only advisable with high-quality sensors, in order to avoid excessive image noise. In recent years, semiconductor manufacturing has become more advanced, and this has improved signal-to-noise ratios.

A large pixel area (large sensor) can capture light quanta more effectively. In recent years, however, camera manufacturers have tended more and more frequently to reduce the size of the pixel area. This is detrimental to the signal-to-noise ratio. For each camera model, depending on the production technology involved, there is an optimal relationship between the number of pixels and the signal-to-noise ratio: this is determined by the camera’s sensor size. Camera manufacturers have started to notice this and turned their attention to achieving a better signal-to-noise ratio and better colour rendition (e.g. Canon EOS 1DX, Canon C300, etc.). In some models, tiny micro-lenses are positioned above each pixel site in order to capture the light more effectively.

The resolution capability (colour depth) of the analogue-to-digital converter (ADC) is a key factor in determining image quality. Colour depth describes the maximum number of colours available to represent a single pixel in an image. For the three basic colour channels (RGB, red/green/blue), an analogue-to-digital conversion is carried out separately per channel. At present, resolutions between 12 and 16 bits per channel are used. In 14-bit mode, the total colour depth is 42 bits for all three channels.

After the signal has been converted in the ADC, the image processer further reduces noise. If digital noise reduction is applied to aggressively, image information may be lost.

The ISO value indicates a camera sensor’s sensitivity to light. The lower the ISO number, the less sensitive the sensor is to light. High ISO settings allow quality images to be taken even when light conditions are poor. However, the drawback of increased light sensitivity is an increase in noise: the image becomes grainy and lacks detail. Therefore, it is only advisable to select high ISO numbers when using high-quality camera sensors, with high colour depth and a large signal-to-noise ratio.