Have you ever tried to capture the fascinating patterns, structures and colours of sand in a photograph? Something that initially sounds quite simple, since the sample consists of motionless small objects, turns out not to be so easy at all: because of its plasticity, sand is an extremely challenging specimen. We took a closer look at the hidden details of sand that are invisible to the naked eye and, thanks to our LM photo microscope, were able to produce some impressive microscopic sand photos.

Because it uses two separate optical paths, a stereo microscope enables realistic, three-dimensional visualisation of the sample. When taking a photograph, however, the camera can only use one optical path, which means that the three-dimensionality cannot be reproduced in the image, which appears flat and generally lacks quality. In addition, the working distance is too large, which in turn reduces the resolution capability. For this reason, the quality of the photos is usually disappointing.

We used the following components, which are described in more detail below, for our test:

The LM photo microscopes were developed especially for photography and are optimised for maximum focus – achieving the greatest possible resolution capability is a key aspect of their design. By using different objectives (4x, 10x, etc.), stunning microscopic images can be created. The LM photo microscope comes as a ready-to-use package that includes lighting (LED spots or LED ring light) and can be equipped very simply and easily with a motorised focusing rail. We offer a small add-on module for assembly.

As a specialist tool for focus stacking in combination with a motorised focusing rail, the LM photo microscope succeeds in making even the smallest details visible.

We recommend the Helicon software for controlling the camera and the motorised focusing rail. We really like this software, and the manufacturer has responsive, knowledgeable customer service staff who are very helpful in case there are any difficulties or questions. The Helicon software consists of two modules: the control software Helicon Remote and the Helicon Focus module for the actual focus stacking process, where a stack of images is merged to create one perfect composite image.

In terms of cameras, we recommend DSLR cameras or system cameras with an interchangeable lens system. In our tests, Canon or Nikon cameras proved to be the most convenient, as they are fully supported by the Helicon Remote software. The Live View feed sent from the camera to the Mac or PC can be used for focussing. When using the Helicon software, the individual images are stored directly on the computer and remain available there for further processing. For more information about the compatibility of your camera, please visit the Helicon website and go to the menu point “Supported cameras”.

We used the Helicon Remote software and the StackShot rail to create image stacks (z-stacks) containing around 100 individual images. To create a large stack of images with the same step size, a motorised focusing rail is essential. We’ve had nothing but good results with the StackShot focusing rail. For our area of use, we recommend the shorter version, since it is more compact and better suited for higher magnifications. On the StackShot manufacturer’s website you will find a complete package consisting of a motorised focusing rail, the required cables and a control box.

The process is controlled remotely from the computer, which is extremely convenient. Only the focal range needs to be set, and then you can get started with stacking. The entire image collecting process is fully automated, and stacks of 100 images or more are created and stored on the hard drive of the computer. 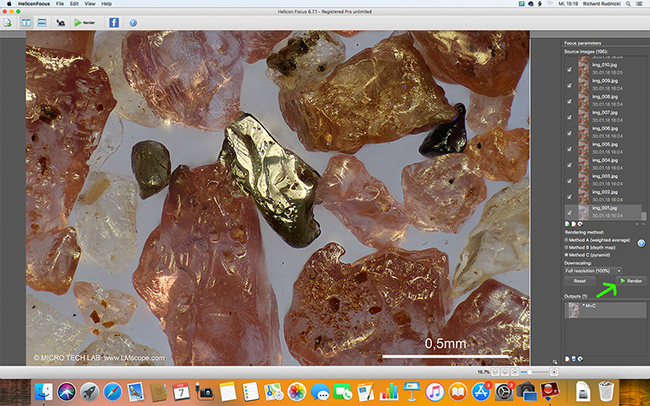 As soon as the stack is complete, Helicon Focus comes into play: you only need to click the “Render” tab and wait for a few seconds until the perfect image is ready. And with a little bit of luck, you may even find a gold nugget. 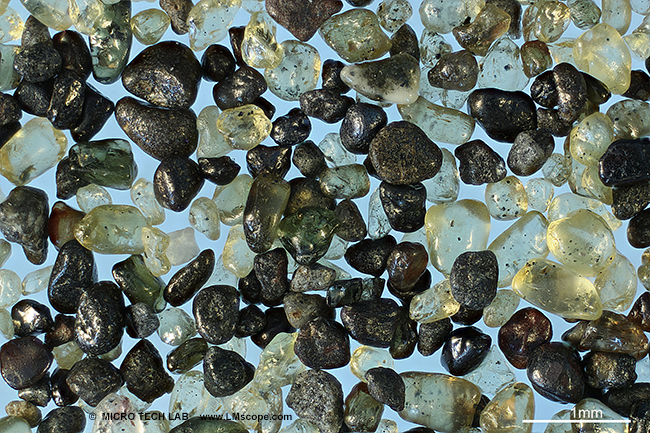 2) 80x magnification: more and more details become visible, and the depth of field is fantastic! 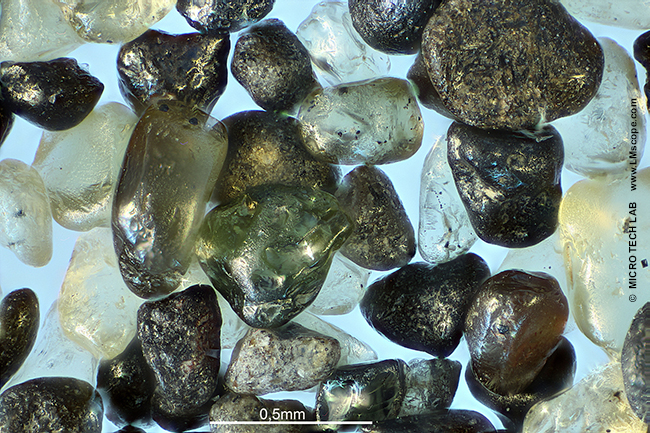 3) Exciting: no two sands are alike. The image below shows a completely different type of sand (from a beach in Tenerife, captured at 40x magnification). 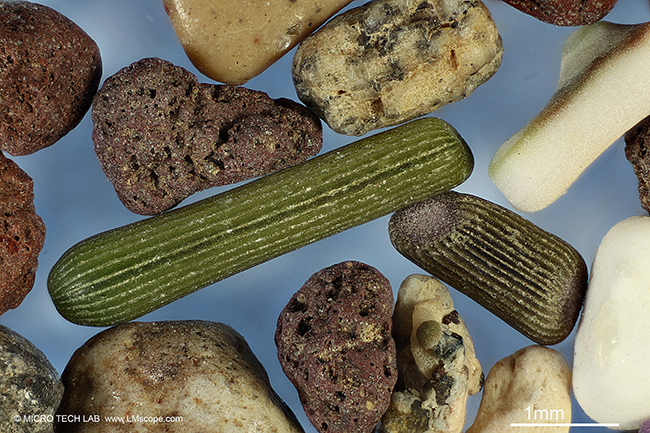 The result is a stunning depth of field and perfectly sharp focus from the close foreground to the distant background. The images speak for themselves.