The Olympus E5 on the microscope

After more than three years, Olympus has released its professional digital SLR model: the Olympus E5. With the E5, Olympus pursues a different strategy than its competitors, with the emphasis being not on “higher and further”, as evidenced, for example, by a higher number of pixels, but instead on quality and ease of use. 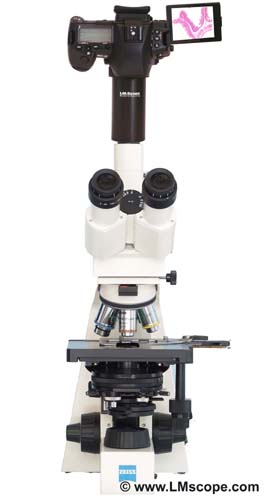 In the picture above, we have attached the Olympus E5 to a microscope using an LM adapter. This unit opens up the possibility of producing excellent photographic documentation on the microscope. 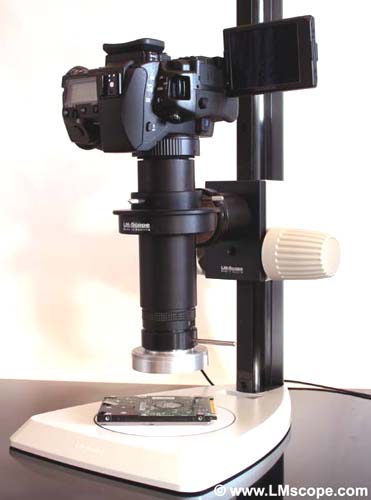 For tthis picture we have attached the Olympus E5 to a 16x LM macro lens. In this case, too, it is possible to work professionally and trouble-free.

The camera housing has a solid and well-engineered structure (860 g). Each opening in the housing has seals so that even working outdoors in rainy and dusty conditions does not pose a problem. The buttons need a little time and effort to get used to, as they have to be pressed relatively hard. The biggest innovation in the housing as compared to the previous model (Olympus E3) is the display. It has grown considerably larger, with a much better resolution, and is now of the same size as the displays on other camera manufacturers’ models. The big plus of the Olympus E5 display is, however, its mobility. It can be turned in almost every direction and is also very sturdy! 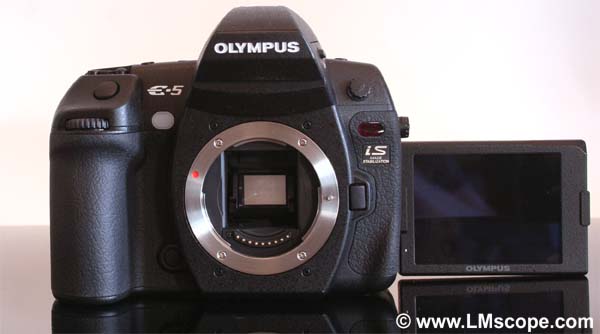 The operating controls are similar to the previous model, with just a couple of switches having been moved due to the larger display. As some menu items and terms used are difficult to understand, it would be useful to have a help function.

A further advantage of the E5 is its exposure metering system. It offers not only a choice between program, aperture priority, shutter priority and manual exposure mode, but also three selectable metering modes (automatic ESP metering with/without using the AF field, centre-weighted metering and spot metering with highlight or shadow control). The AF field is of little importance for microscopy, as the auto focus is not used in microscopy applications. White or black are used as the meter reference rather than grey. This enables the correct exposure of light or dark points in the image. Nevertheless, irrespective of the setting used by the photographer, the exposure metering works so reliably that one almost always obtains a correctly exposed image.

The Live View function is an excellent complement to the optical viewfinder. The built-in magnification function also offers the option of setting the focal plane with a high degree of precision, which is particularly helpful for the requirements of microscopy. The only disappointment is that the Live View mode does not work on the HDMI port.

The camera also has an exposure preview function, which can be used to control the white balance. There is also a comparison view of the selected motif, and exposure corrections and different colour temperatures can be simulated. However, this function is not 100% reliable.

The menu contains further settings options. Overall, there is a choice of six pre-settings, which, in addition, can be further configured to suit the camera user’s requirements (contrast, saturation, focus, etc.).

The post-editing options are extremely practical; these are available both for RAW data and for JPEGs. An example is the shadow adjustment function,  which can be used to retrospectively increase the exposure levels in shadowed portions of images to make dark areas more visible. Another advantage is that the edited images can be saved as well, so that they can be compared to the original images at a later point.


The Olympus E5 also has a video mode; however, it is only possible to produce 720p HD videos.

One surprising aspect of the E5 is that in comparison to its competitors’ current models, the number of pixels, at 12 megapixels, is relatively low. However, for use in microscopy, this is not a disadvantage, because with an increasing number of pixels on a sensor, the sensitivity of the camera declines and the signal noise increases. In practical terms, this means that the colour reproduction is not optimal, and the image itself appears washed out. In microscopy, any limitation is solely the result of the numerical aperture of the lens.

Another positive aspect of the Olympus E5 is that it delivers excellent resolution. The resolution in the centre of the image is almost 100% at an efficiency factor of 90%!! In this context, it should also be mentioned that Olympus uses only moderate noise suppression, which also contributes to the images demonstrating excellent sharpness. A moderate luminance noise is only observed above an ISO number of around 800.

Regrettably, the remote control software is no longer included in the delivery scope.

A good alternative to the Olympus E5 is its “little sister”, the Olympus E-620. It is considerably cheaper, but its body is significantly less robust and it produces somewhat more pale looking images.

With both cameras, we recommend the purchase of the IR remote control if you are planning to work on the microscope or macro stand. An alternative solution is to use the self-timer with delayed exposure. 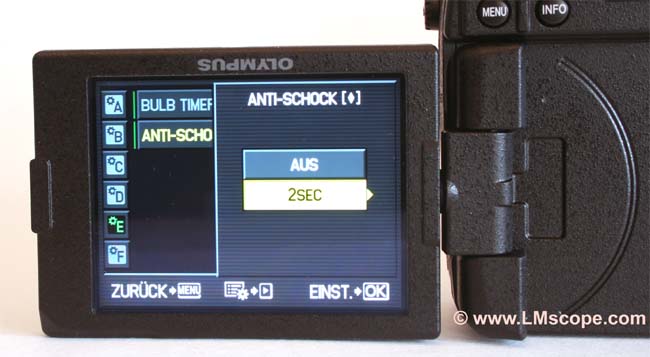 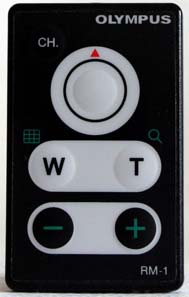 Conclusion
The Olympus E5 scores points through its robust build and the display, which can be turned in every direction and which is also very sturdy. Although the number of pixels is relatively low, this is not critical in microscopy. The images produced deliver excellent resolution, colour and contrast. For microscopy, in particular, it would be desirable for the Live View mode to work on the HDMI port as well. The remote control software is especially useful for working on the microscope, and therefore it is very regrettable that this software is no longer included in the camera’s scope of delivery and apparently can also no longer be ordered directly from Olympus. We would definitely recommend the purchase of the IR remote control!